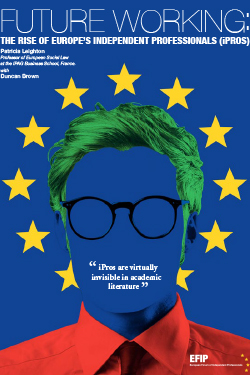 By the beginning of 2013, five years since the onset of the recession, there had been a loss of around seven million jobs across the European Union. On average, one in ten people were left without work, with countries such as Spain and Greece facing much higher unemployment rates. Yet one part of the labour market bucked this trend.

The EU has seen a new phenomenon - the rise of the independent professional, or iPro, often referred to as freelancers. Their rise represents a major shift in the nature of work and ways of working. No longer can work be defined simply in terms of working for a big corporation, public sector employer or an SME. iPros, with their different approaches to work and distinct philosophy, have the ability to be flexible and innovative, and provide value-added to businesses and economies.

iPros are highly skilled self-employed individuals who work for themselves but do not employ others. They range from journalists and designers to ICT specialists and consultants. iPros represent a significant segment of professional working generally, making up 25% of all those working in professional, scientific and technical work and 22% of all those in arts and entertainment. The growth in iPros in the EU since 2004 has been remarkable. Numbers have increased by 45% from just under 6.2 million to 8.9 million in 2013, making them the fastest growing group in the EU labour market.

The growth in iPros has not been consistent across EU states, but in the Netherlands, Poland and France it has been especially marked. The EU still faces unprecedented levels of unemployment and without this growth in iPro working, the picture would be much gloomier.

The CRSE is the leading international think tank working to improve the understanding of the self-employment sector and its impact on the economy. In collaboration with a global network of academics at the forefront of self-employment studies, the CRSE conducts and promotes leading edge multidisciplinary research. The aim of the CRSE is to better inform public policy and add value to practitioners.